2020 continues to be ALL VIRTUAL. In-person Learning Labs continue for students Mon-Thurs.

Earlier this year, we started a new feature in our eBlast recognizing some of our fantastic Ferndale Alumni. On this page you will find the ones we have featured so far. We want to use this page to celebrate our amazing educational legacy throughout the years. Do you know a Ferndale alumni who is representing the Ferndale Schools community proudly? Send an e-mail to Bill.Good@ferndaleschools.com to help us feature positive examples of Ferndale Schools legacy.

Dr. Ben Dantzer has been all around the world researching animals and ecology, but his journey began right here at Washington Elementary, now the Kulick Center. “I was lucky to experience many excellent and passionate teachers throughout Ferndale Schools that definitely shaped my career development.” A 1999 Ferndale High School alumnus, Ben graduated from Michigan State University in 2012 with a dual-degree Ph.D. in Zoology as well as Ecology, Evolutionary Biology, and Behavior. He then went on to serve as Director of Studies in Natural Sciences at Churchill College in Cambridge, England while completing his Postdoctoral fellowship at the University of Cambridge.

Ben is currently an Assistant Professor at the University of Michigan where he conducts research and teaches classes. His research addresses understanding the causes and consequences of variation in the characteristics of wild animals with a specific focus on understanding how early life experiences shape individuals and how wild animals can cope with changing environments. 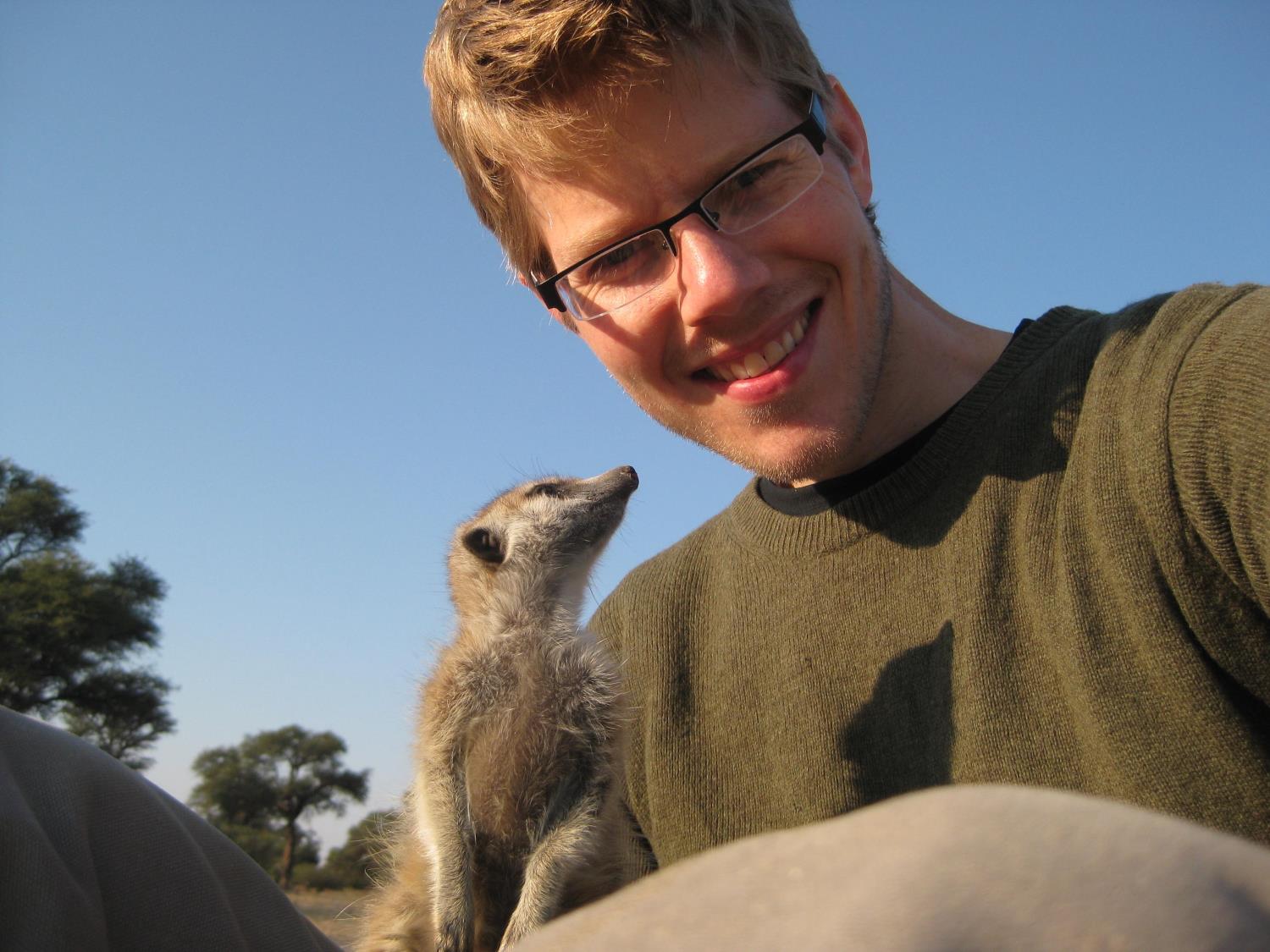 “I always enjoyed my biology classes with Mr. Bancroft and Mr. Bassier at Ferndale High School. They were great teachers that were very dedicated and seemed to know something about everything. It definitely fostered a strong sense of curiosity I had about the natural sciences, especially biology.”

This curiousity has taken Ben all over the world as an evolutionary biologist, studying animals in the Yukon, Canada, and South Africa, and when he looks back at his experiences with Ferndale Public Schools he sees them
as being incredibly important in shaping  who he is and what he cares about. Ben recognizes that the diversity that Ferndale Schools fosters has greatly impacted his career, and he thinks it would impact anyone positively in any chosen field. “The diversity at Ferndale High School was remarkable, and my time there was formative in the sense that it instilled in me a deep appreciation of diversity and its importance in all careers and learning environments. Academia and scientific research or STEM fields are all places that are in dire need of more diversity (in all its definitions), and my time at FHS and growing up in Ferndale provided me an opportunity to learn the importance of that diversity.”

When Amanda Osorio was attending Ferndale Schools, she had no idea what an impact her time spent in the district would have on her later life. As a self-described academic, Amanda excelled in all of her classes and took advantage of every opportunity Ferndale offered to further her academic career. When she graduated in 2000, she left high school with 40 college credits from AP courses, having earned a Gates Millennium Scholarship and acceptance to Smith College. All of these things are outstanding accomplishments, but it was her involvement outside of the classroom that truly shaped the person she has become today.

During her time at Ferndale High School, Amanda truly found her voice in choir under the guidance of longtime chorale teacher Ms. Brown. “Mrs. Brown, the choir teacher, heard the potential in my voice and arranged for me to have private voice lessons. It was good for the choir to have stronger singers, but it was such a gift to me as it helped fulfill a desire I held but was afraid to articulate. Guess she was right, as I ended up singing at the Metropolitan Opera House!”  Longtime Ferndale patron of the arts Lori Christensen coached talented FHS vocalists for years, but Amanda was perhaps her greatest success story. Amanda went on to not only be a singer for the Metropolitan Opera, but she also won a Grammy during her residency at the MET for her work in the live broadcast of The Tempest.

Amanda’s academic excellence led her parents to enroll her at Cranbrook-Kingswood after middle school. While this was an incredible experience, Amanda never felt at home at Cranbrook and constantly felt like something was missing. “I was miserable there. I came back to Ferndale and with the care that came with being in my home community, the freedom to explore who I was and wanted to be, and of course an amazing vocal music and theatre program, I blossomed.”

Now living halfway around the world in South Africa, Amanda is the mother of two and owner of her own arts company, Africa Arts. She says Ferndale will always be home, and Ferndale Schools will hold a special place in her heart: “it is a rare district that spans the socio-economic diversity of Ferndale and yet still manages to cater to the needs of a great majority of its students.” Ferndale gave Amanda the opportunity to explore not only her academic potential but her artistic calling as well.  As one of the longstanding staples in the district, every year Ferndale High School puts on a large scale musical production. During her time at FHS Amanda even had the opportunity to be the student director for the musical Carousel.

Looking back now Amanda attributes much of her positive experiences and success on Ferndale as a community as well as Ferndale Schools and the incredible teachers the district has employed over the years.  “Being able to direct a musical, take university classes, meet students from other districts at CASA, experience diverse friendships, find teachers who were advocates, and not be judged for the process of growing up—these are the incredible gifts that Ferndale gave to me. That kind of support is priceless; it allowed me to take risks and it helped me become the successful person I am today.”

Standing in front of the 2001 graduating class, valedictorian Andrea Knittel was looking forward to heading off to University of Michigan in the fall to study Spanish and Cellular and Molecular Biology. Looking back, Andrea a Ferndale Schools student since kindergarten had worked tirelessly to get to this moment. She was graduating with 51 college credits from AP courses and classes from Oakland Community College she had taken. She was an accomplished musician playing cello in the orchestra under the direction of Mr. Roger Smith and a talented thespian with the guidance of Ms. Linda Murley.  “Both Mr. Smith and Ms. Murley let me express myself creatively and also fostered leadership and teaching skills that I continue to use today.”

Here we are 16 years later and Andrea has come a long way from the teenager who broke both her wrists during rehearsal for the spring musical. Of course she still managed to teach the choreography but with two heavy casts that was no easy task. Today, Andrea is Dr. Andrea Knittel holding a dual MD/PhD from the University of Michigan Medical School and University of Michigan School of Public Health in Medicine and Health Behavior and Health Education. Dr. Knittel is finishing up her residency at the University of California in Obstetrics, Gynecology, and Reproductive Sciences. In her spare time, (In Andrea’s words “residents can only work 80 hours a week!”) when she is not delivering babies or meeting with patients, Andrea is continuing the research work she started as a doctoral student, studying the effects of mass incarceration and the risks of contracting STDs and HIV in the community.

“At Ferndale, I was encouraged to pursue things I felt strongly about. I was a peer HIV educator, which was my first involvement in anything that was really health care-related, and glimpsed even then that my life would be dedicated to addressing health disparities and inequities.” Andrea was also given the opportunity to learn Spanish beginning in kindergarten and continued through dual enrollment at Oakland Community College. This opportunity led Andrea to become a certified Spanish/English bilingual provider by the San Francisco Department of Public Health.

Next up for Dr. Knittel, moving to University of North Carolina this June to pursue a fellowship that will let her continue her clinical work and also re-immerse herself in the research she loves.