Ferndale Schools will be building a new elementary building on the CASA/Jackson Park site. Approval is required by over 50% of residents to use the complete property for the current plan. We believe this plan will provide the best solution for student learning, community improvement, and traffic flow.

The 1st round of ballots collected where publicly counted on March 23rd, 2021.  The results from this first counting were 265 YES and 120 NO.  As more ballots are returned we will schedule a second public opening.  Please note that 50% + 1 vote are required for the measure to pass or fail (606 votes).

Our next public opening of ballots will be on Monday, April 19th, 2021 at 5pm in the FHS Media Center.

Click the link to view the video of the ballot counting.

All Ferndale Schools visitors are required to follow the existing safety restrictions:

The next public ballot opening will be Monday, April 19th, 5pm, in the FHS Media Center.  Ferndale Schools staff and volunteers will begin canvassing the area and knocking on doors of voting eligible residents who have not responded to collect votes and signatures of authenticity on Saturday, April 24th.

This collected information can be made available to the public, with Personally Identifiable Information redacted, upon request.

How to Vote Guide

Ballots will be mailed next week to the owner of every property eligible to vote on this issue.

What is being proposed?

What is the exact Deed Restriction language?

The deed restriction, in relevant part, is as follows:

“These Covenants are to run with the land and shall be binding on all parties and all persons claiming under them until January 1, 1975, at which time said Covenants shall be automatically extended for successive periods of 10 years unless by a majority of the then owners of the lots it is agreed to change said covenants in whole or in part.”

What a NO Vote Could Mean

If the deed restriction is not lifted, the land will not be included in the $25,000,000 investment in the Jackson Park site. This does NOT mean the land could not be purchased by developers and turned into a single family home, as permitted by the existing deed restriction stated above. Voting NO does not place any new restrictions that would guarantee a greenspace remains on the site.

Only a YES vote will ensure that Ferndale Schools can integrate as many of the natural resources as possible into a beautiful public resource that will serve the community for generations.

Why do you need me to vote again, I thought the Bond was approved?

What will be built on this land?

What will happen to the baseball field that is currently on the piece of land?

Has a traffic study at the site been completed?

The image below shows the complete site. The red area shows the additional space Ferndale Schools purchased from Oak Park, which we need your permission to improve and include in our construction plans. 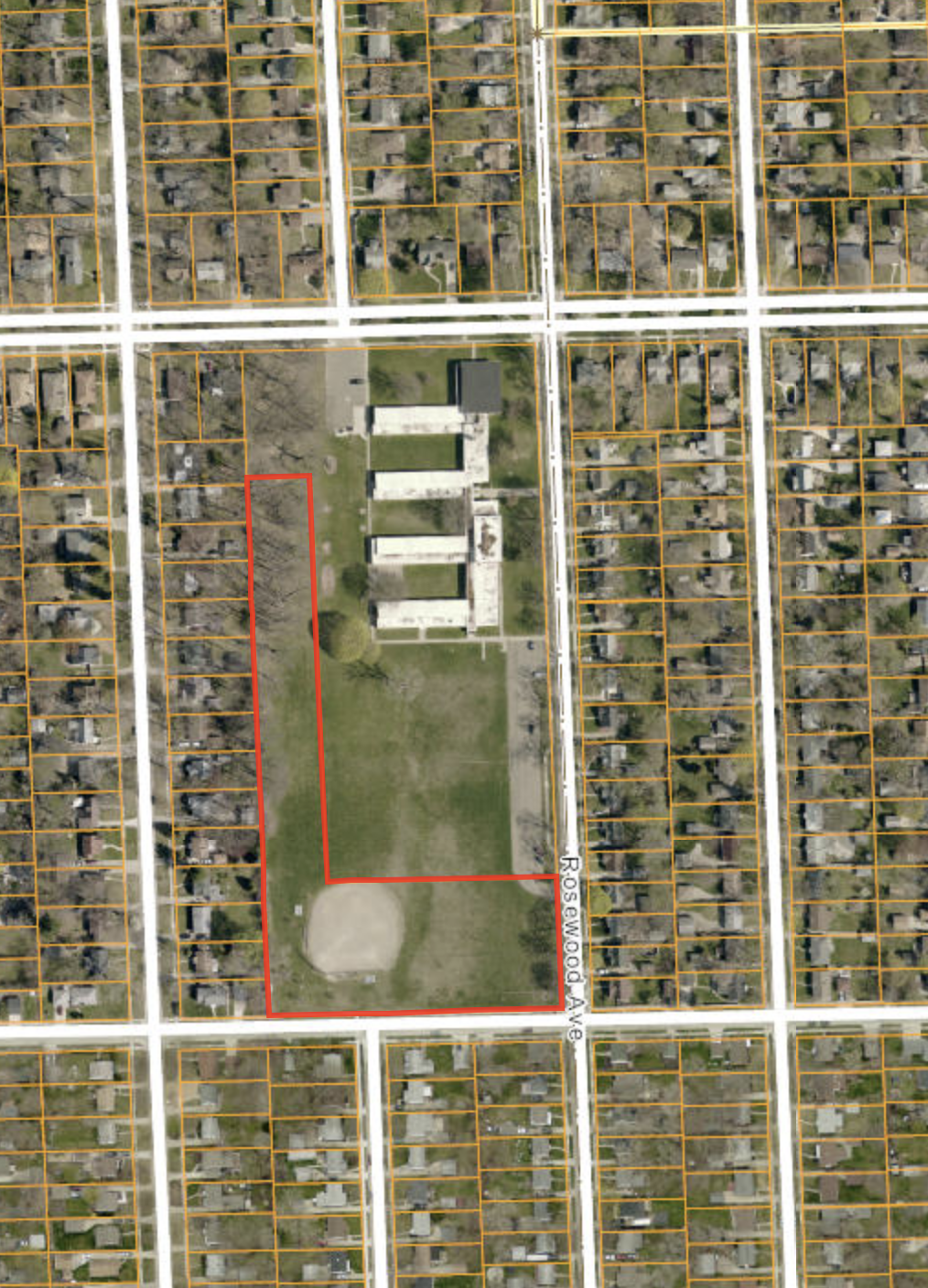 Will this elementary school be only for Ferndale School District?

FPS has only have one K-2 building, so this school will include all K-2 students who are enrolled with Ferndale Public Schools.

Are only a portion of Oak Park residents being asked to vote, and if so, who and why?

Per the deed restriction only residents whose homes are listed on the "plat" are able to vote.  That is roughly 1,200 residences. This list was provided to us by the city.

Was the postcard sent out to all Oak Park residents?

The postcard was sent only to the roughly 1,200 residences on the "plat" as determined by the City of Oak Park.

How will the votes be counted?

Returned mailers will be tallied initially by Ferndale Schools. If 51% of the votes are not collected in favor or in opposition to lifting the deed restriction., we will send out canvassers door-to-door to collect sufficient votes to make a determination. Once 51% of the vote determines the outcome, we will submit all ballots and signature documents to the Oakland County Registrar of Deeds for review and certification before that office makes the official change to the deed.

What happens if it's voted down?

The school will be built on the same land. The deed restriction only applies to roughly 4 of the 11 acres that comprise Jackson Park and School building. A "no" vote would simply limit our ability to space the layout of the design appropriately.  We want to lift the deed restriction on Jackson Park so that we can plan the entire site in one cohesive way. This will lead to more green space, better traffic flow, and a more useful area for the entire community.

How could the property have been sold without a vote from the Oak Park residents?

Ferndale Schools and the City of Oak Park have established a purchase agreement. It has not been officially sold yet. We have been meeting regularly with the city, and both bodies have been discussing this matter publicly for almost two years. Only if the deed restriction is lifted will the purchase be completed.

Is it only the property outlined in red on the postcard that applies to this deed?

Yes, the deed restriction only applies to the area outlined in RED in the photo above.  Ferndale Schools can build on the land we currently own: roughly 7 aces of the 11 acre site.  Unless the deed restriction is lifted, the new elementary building will be built on the 7 acres we own, leaving the other 4 acres approximately as is.

What would happen to all of the trees bordering the properties on the west portion of the entire area?

We have told the architect to try to save as many of the mature trees as possible along the west side of the site to keep the park-like atmosphere. Due to current easements, those areas are hard to build on, and we share your preference for keeping the trees.

The goal is to maximize greenspace including developing outdoor learning spaces, walking paths and several playgrounds which will be accessible to residents. Lifting the deed restriction will provide us more space, allowing more opportunities to preserve the natural elements that already exist on the property. It will not be possible to answer this question fully until the parking lots and bus/drop-off loops are designed. We will have more information as the project progresses after the vote.

Without seeing the plan of exactly what would be built and where, and how much property will remain for park, recreation and sports, how can we determine if this is the best thing for our community?

The overall layout of the property will dramatically improve to allow for the maximizing of the entire piece of property into one cohesive vision. While the spacing of the green area will change, this plan will lead to new walking paths and playground spaces for families to utilize. By using the entire piece of property, we can also allow for the best traffic flow possible to avoid frustrating neighborhood congestion.
Also having a brand new, state of the art, elementary school will positively impact property values.  Ferndale Upper Elementary just down the street will also be renovated, making this area the home to two of the most prestigious and innovative elementary schools in the state.

Was the City of Oak Park aware of Ferndale School District's intent to build this school when it established this Purchase Agreement?

Yes, this plan has been discussed at many public meetings with both the Ferndale School District and the City of Oak Park.